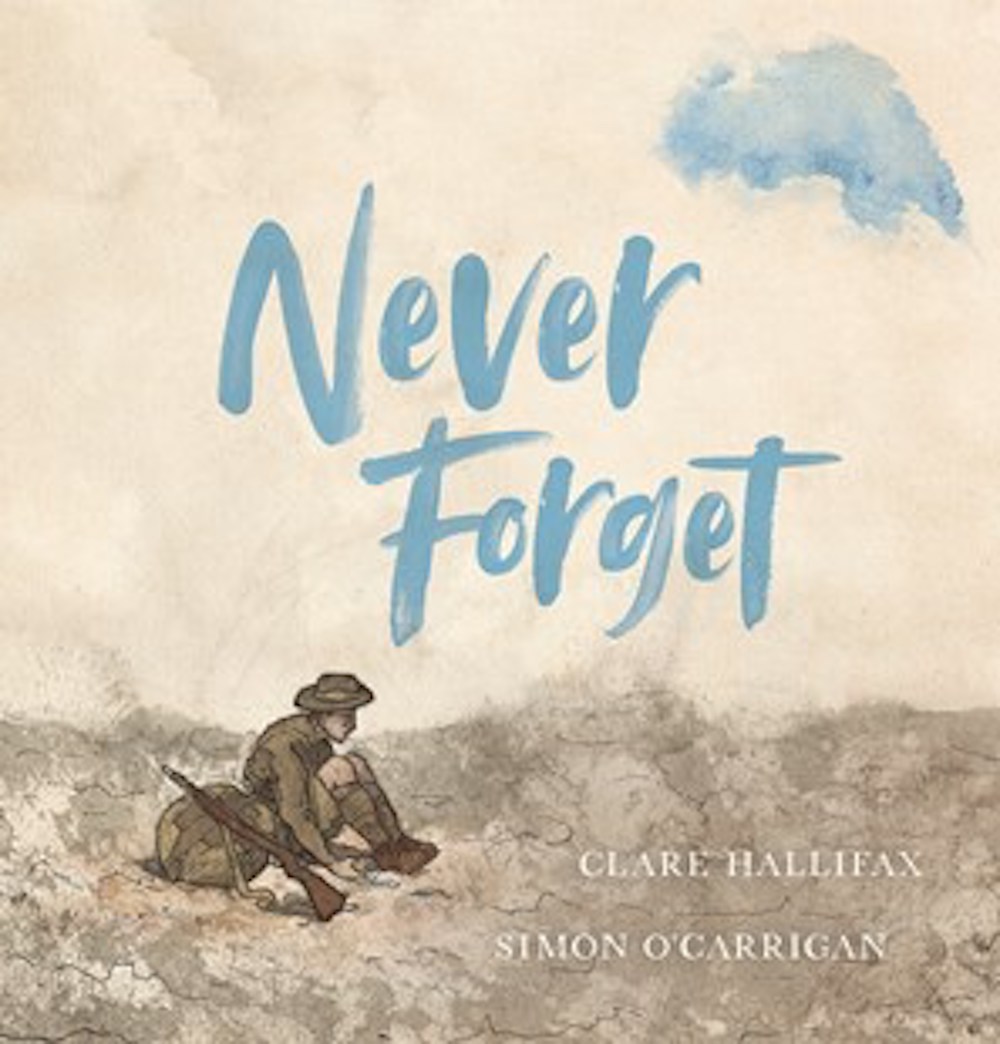 Never Forget is a thoughtful and moving portrayal of World War I. War and conflict are difficult concepts to explain and for children to comprehend - how they start, why they continue, how they end, what is learnt, who we become.

Written by Clare Hallifax and illustrated by Simon O’Carrigan, this picture book does not seek to justify or glorify war. Instead, the story casts war as a fact that has consequences for all. This is evident in the powerful front and back endpapers of the book - a clever pictorial of how war affects the landscape and an ingenious metaphor for how war changes lives.

Never Forget offers poignant snippets of the soldiers’ experience - their conditions, their roles, their struggles, their loss, their remembrance of home and family. I was touched by the simple refrain, which is also the books title and left pondering the emotive phrase, ‘those who urge us to fight are not by our side.’

O’Carrigan researched the hundreds of artworks completed during World War I by both war artists and soldiers. He sought permission from their descendants to reimagine, restructure and reinterpret drawings he felt would best tell the story of the Great War - the war that was supposed to end all wars. Some of the characters are based on the illustrator’s family, the rest are real people of the time.

The muted colour palate - shades of cream, grey, sepia and black with occasional highlights of blue, green and red - depicts, with rich detail, images and moments of a bygone war, in which the Anzac tradition was formed. With an evocative front cover illustration that also forms the only wordless double page spread, O’Carrigan has captured war’s isolation, loneliness and despair.

In 159 well-chosen words, Hallifax evokes a deeper layered meaning to accompany the vivid illustrations. Told with exquisite prose, gentle rhyme and seamless repetition, this is a significant picture book to introduce readers four-years and older to the sacrifice, bond and courage of the original Anzac soldiers and the many who have fought since.

Never Forget not only explores war, but also separation, family and mateship. The story works on many levels, transcends all ages, and could apply to any conflict. Every Australian and New Zealand household should own a copy of this book and take it down from the bookshelf, read it, sit with the images but above all - never forget.

Reviewed by Leesa Allinson, a student in RMIT University’s Associate Degree of Writing and Editing as part of the RMIT Reviews series.