It’s not rare for an author to feel misgivings about the ways their early works make their way into print. 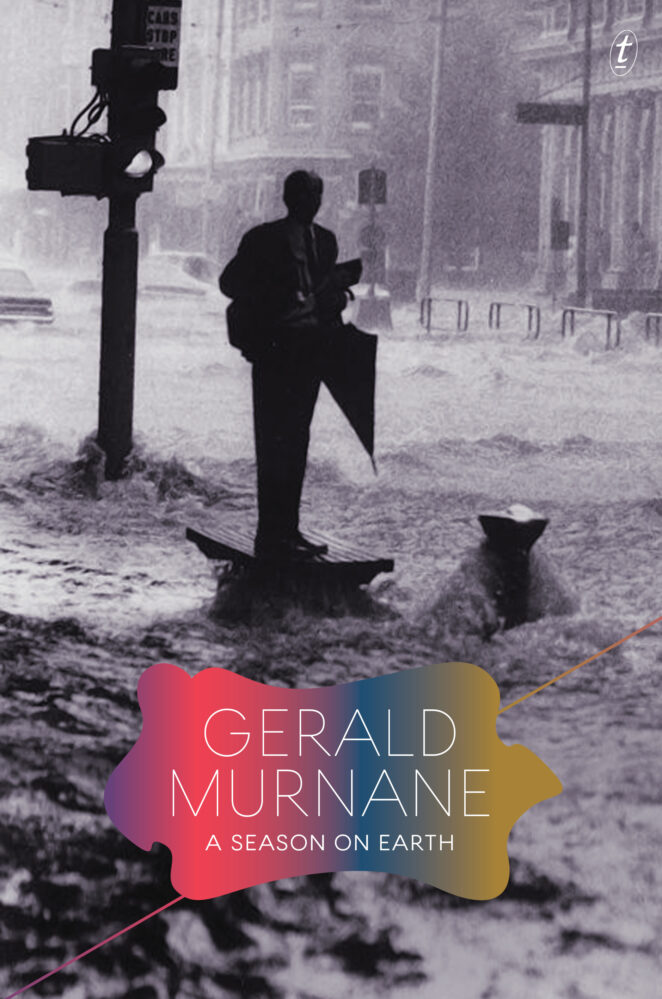 Samuel Beckett despaired over the litany of spelling and typographical errors present in the first edition of his novel Watt. John Barth changed the ending of his first novel The Floating Opera to something less nihilistic at the request of his editor. But when reading the foreword to A Season on Earth, it is clear Gerald Murnane had special reason to feel aggrieved over his editors’ treatment of his work.

Trimmed down from a sizeable manuscript, his first novel Tamarisk Row was published by Heinemann in 1974. When the time came for the submission of his second novel A Season on Earth, even Murnane could see that his publisher ‘was languishing’. Hilary McPhee, Heinemann’s lively commissioning editor had left to found McPhee Gribble, and without her they ‘seemed adrift’ with no full-time editor brought in to replace her. Their response to Murnane’s 142,000-word text was elegant in its brutality – they wanted to cut it cleanly in half, publishing the first half as one novel and the second as a sequel some time later. After no small degree of protest, Murnane begrudgingly crafted a new ending and the result was A Lifetime on Clouds, first released in 1976. For decades the remaining half lay untouched in his literary archives.

But now, Michael Heyward and Text Publishing have released the complete, unexpurgated text of A Season on Earth – an act Murnane describes as a ‘literary miracle’. Murnane notes in his foreword that the version of his protagonist Adrian Sherd that appears in A Lifetime on Clouds is ‘only half a character’, and indeed, this new volume makes clear the full complexity of Murnane’s portrait of obsession, guilt and Catholicism.

Detailing the turbulent inner-life of a Catholic schoolboy coming of age in 1950s Melbourne, the novel is far from a mere Australian Portnoy’s Complaint, the work it was compared to when originally published. Although they’re both character studies of young men whose, to use Roth’s description, ‘altruistic impulses are perpetually warring with extreme sexual longings, often of a perverse nature’, Murnane does more than simply swapping out Roth’s Judaism for Catholicism and his New Jersey for Melbourne. To quote a contemporary review from Les Murray, the book is ‘calmer [and] lonelier…with none of the excited asides and grabs at social significance which occasionally weaken Roth’s book.’ The first half of the novel is what those who have read A Lifetime on Clouds have already experienced – a portrait of a young man’s elaborate masturbatory fantasies and deep-seated fear of God’s judgement; his misguided notions of women, love and marriage; and his eventual entry into the Catholic priesthood. The only change in this section is the removal of Murnane’s rewritten ending in lieu of a sequence that leads the reader into the novel’s second half.

Murnane’s portrayal of Adrian’s increasingly elaborate fantasies of sexual encounters with American film-stars and later, of the ‘joys of a Catholic marriage’ are rendered with striking intensity. Murnane shifts in and out of Adrian’s interior world with assurance, sometimes jumping between the imagined and the real within the space of a single paragraph, or even sentence. Far from the joyous celebration of imagination that readers were greeted with in Tamarisk Row, Adrian’s subjectivity is never free of conflict and guilt and the result is an adept blending of comedy and pathos. One particularly troubling scene sees Adrian and his classmates discussing when and in what shape the apocalypse will arrive.

Adrian’s palpable discomfort intensifies in the novel’s third section, which sees him travelling to New South Wales to join a junior seminary. His already fevered imagination goes into overdrive in such austere surroundings as he tries and fails to adhere to monastic ideals. At the seminary he meets a twenty-one-year-old named Kevin Gilchrist whose stories of past indiscretions thoroughly impress Adrian. He quickly becomes convinced that his new acquaintance will be able to go the distance and become a priest because, like him, he ‘had tasted the pleasures of the world and found them not worth the price.

This reflection from Adrian is symptomatic of his difficulty in distinguishing fantasy from reality, a theme which grows in the novel’s final section, where our wayward protagonist abruptly turns to poetry for his salvation. He discovers poems like Matthew Arnold’s The Scholar-Gipsy and is ensnared by reflections on the ‘strange disease of modern life’. So begins a search not just for an ‘ideal landscape’ to be translated into a poem, but also for a poet whose life can be used as a model for Adrian to follow.

Murnane subverts the traditional trajectory of the Bildungsroman as Adrian cycles through poetic role-models at a comically quick rate, slowly retreating further from his lived reality and its responsibilities into his inner world.

When viewed in light of Murnane’s full bibliography, A Season on Earth remains a strange book. This isn’t just because of how commercial the novel’s subject matter was at the time, but also due to its tighter structure, especially when compared with the impressionistic, almost modernist feeling of neighbouring books Tamarisk Row and The Plains. This isn’t to say that there isn’t still formal innovation throughout, but these features mean that despite its formidable length, A Season on Earth could be a gateway into Murnane’s work for newcomers. For those who are already converted, this richer and more complex version of an early work by one of our finest writers is welcome.

Reviewed by Jack Rowland, a student in RMIT University’s Associate Degree of Writing and Editing as part of the RMIT Reviews series. Jack’s literary criticism has appeared in the Australian Book Review and the Big Issue. You can find more work by Jack at www.jackrowland.net.