It’s hard to find the words to capture what it’s like to live with mental ill-health, but Georgie Dent achieves this difficult task. 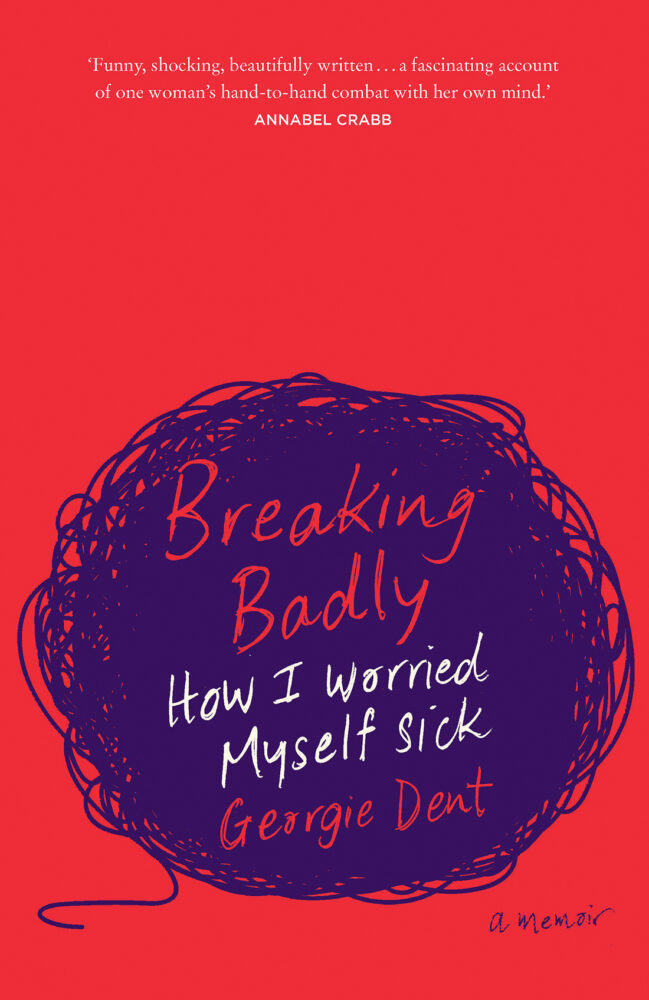 Dent was admitted to a psychiatric hospital after landing what she imagined was her dream job. Dent’s writing is admirably honest, and those who experience (or have loved ones who experience) mental ill-health are likely to identify with this work.

Breaking Badly: How I Worried Myself Sick is an effortlessly funny read, and this humour ensures Dent’s experience is relatable. Her exploration of the human mind may remind some readers of Haruki Murakami’s non-fiction, as both authors shed light on universal questions by reflecting on their personal experience.

Breaking Badly explores how unhealthy thought patterns can and do develop. Dent’s reflections on perfectionism (a personality trait that contributed to her breakdown) and obsessively comparing heref to others feels particularly relevant in today’s social media culture. Dent muses that although she was blessed with supportive and unjudgmental parents, she herself ‘appointed a crew of unreasonable characters to sit on my shoulders and shout me into misery day in, day out like a harsh parent might’. Dent’s voice is built around these sorts of observations, which carry serious weight despite her humour.

Dent explains how her experience with physical illness – she was diagnosed with Crohn’s disease at 19 – also affected her mental health. As she writes: ‘I needed to deny my illness lest it shatter the shield of perfection I was unknowingly carrying around’. Dent developed a habit of self-loathing once it become clear that her illness would not yield to her belief that she should be infallible, and her shield of perfection shattered. The combination of chronic illness, perfectionism, and how she (at first) viewed her illness as lowering her worth set the scene for her to develop extreme anxiety.

Dent’s style is concise. Her descriptions are sparse but her voice has strength, and this memoir commands attention. Chapters are organised around significant periods in Dent’s life and are interspersed with musings on how attitudes towards mental health have changed since the early 2000s, and how a person’s life experience and physical wellbeing relates to their mental state.

Dent details her time working as a lawyer, revealing the ludicrous demands of the profession (on her first day she was required to fill out timesheets for the past two weeks). She experienced blatant sexism as well as the extreme abuse new lawyers are sometimes subjected to. Dent took a break from her career and sought refuge at her parents’ home. However, Dent’s physical and mental health worsened, culminating in her two-week stay at a psychiatric hospital. It was here that she learned how mental and physical health are closely linked, and how toxic thought patterns can, if left unchecked, lead to breakdown and physical illness.

Dent’s humour shines when she recounts on her experience in rehab. She describes her toxic thought patterns as making ‘the very late Plato roll in his grave’. Her descriptions of the sense of community in rehab demonstrate the importance of being open about mental ill-health, and show how self-care is made easier when you are near others who encourage you to look after yourself. The way Dent describes this shift in her thinking may prove encouraging for those in similar situations. She encourages the reader to be watchful for signs of mental ill-health and offers strategies on how to mitigate anxiety.

Breaking Badly: How I Worried Myself Sick is a surprising read. Dent’s humour brings lightness to her harrowing experience – a testament to her wit and writing skill. This memoir should be read by anyone who is or has been affected by mental ill-health. Dent’s story will provide the reader with a sense of solidarity, and her advice could be a source of much-needed encouragement.

Reviewed by James Kneebone, a student in RMIT University’s Master of Writing and Publishing, as part of the RMIT Reviews series.