Fixed It could not have come at a better time. Australia is in the grip of an epidemic of violence against women. 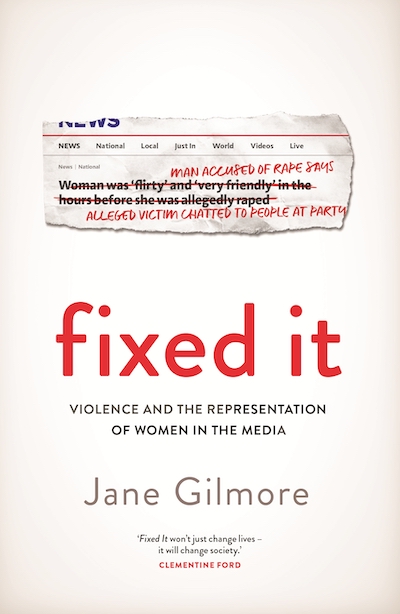 Fixed It could not have come at a better time. Australia is in the grip of an epidemic of violence against women. The situation is getting worse, and if we don’t make changes at every level of society, from personal attitudes to government mandates, women will continue to die. It is a stark reality, and one that journalist Jane Gilmore tackles head-on in her bold, intelligent and frightening exploration of violence and the representation of women in the media.

Gilmore is the woman behind Fixed It, the simple yet revolutionary campaign to challenge misreporting about violence against women, usually in the form of victim-blaming that is prevalent in print media. It began in 2015 when a major news site published the headline: ‘Townsville police say selfie could have led to alleged stabbing murder’. The nonsensical and offensive nature of the headline drove Gilmore to take a screenshot, fix it to: ‘Townsville police say man’s decision to stab a woman caused alleged stabbing murder’, and post the corrected version to Twitter, where it proceeded to get a huge response across social media. Thus, the Fixed It project was born.

Fixed It the book uses the importance of language to frame cultural attitudes towards violence against women as the starting point for an in-depth exploration of social and structural factors that enable this violence to persist. She sees reporting that diminishes the culpability of violent offenders (predominantly men) and attributes partial blame to their victims (predominantly women) as an intrinsic part of the cycle of violence that sees ‘around seventy Australian women…murdered each year, more than 80 per cent of them by men who claim to love them’.”

Too often, writing about domestic violence shies away from boldly stating the truth – that there is an epidemic of men murdering women in this country – for fear of ostracizing male readers. But the reality is frightening and uncomfortable, and Gilmore is unafraid to put the blame squarely at the feet of the men who murder. The book is filled with studies and statistics to support her claims, so that even the most ardent ‘not all men’ commentator will have a difficult time arguing against the facts presented.

While the subject matter is distressing, the writing is frank and engaging which makes Fixed It approachable for all readers. This is not a book that dwells on the salacious details of crime, quite the opposite, Gilmore’s goal is to humanise the women treated by the media as click-bait and reduced, in official reposts, to crime statistics.

Knowledge is power, and Fixed It gives you an arsenal of facts to deploy in the fight against misinformation and victim-blaming. You’ll want to snap photos that you can post to comment sections every time someone makes a claim like ‘if a man really committed rape he’d go to prison. For example, from the chapter on rape myths you can counter with the fact that:

In the second-half of the book Gilmore broadens her scope and highlights other areas of society, including politics, pop culture and sport, where inequality prevails. In the chapter on politics, she explores the way women’s exclusion from the power structures ‘that govern economic and social policy’ is linked to inaction on domestic violence. Joe Biden once said, ‘don’t tell me what you value, show me your budget, and I'll tell you what you value’. With that in mind, Gilmore notes that ‘by 2017, the Australian federal government was spending around $35 billion on national security and $160 million on domestic violence each year. If you divide that spending between the past twenty years’ worth of victims of both terrorism and men’s violence, it comes to $53 billion per person affected by terrorism and $55 per woman affected by male violence’.

I don’t know any women who are not aware of the dangers posed to them by men. As a woman who lives in the world, this book made me sad, enraged and galvanized to keep fighting for women’s right to exist and be safe, but it didn’t shock or surprise me. What did was that I was recently at dinner with a close group of friends, discussing the #metoo movement, and a male friend commented to me that he didn’t know any women who were victims of sexual violence. A quick glance around the table confirmed to me that in fact, to various degrees, every woman at the table was. Every. Single. One. Not wanting to violate any of the women’s privacy, I told him that multiple women in the room were survivors of sexual violence. As the shock registered on his face, my heart sank a little at the realisation of how far we have to go in the fight to end violence against women, when even socially engaged, educated men have no clue about the extent of the epidemic.

When you buy this book, get a copy for the men in your life. They need to read it.

Reviewed by Elizabeth Robinson-Griffiths, a student in RMIT University’s Associate Degree of Writing and Editing as part of the RMIT Reviews series.