A sky the colour of intense anxiety. 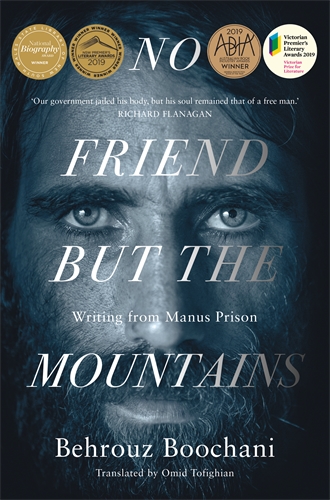 No Friend But the Mountains opens with these lines of poetry, and immediately the reader knows this book, written from Manus Island, is no ordinary account of life in prison, no dry journalistic tome documenting Manus and offshore detention. The style is in keeping with a literary novel, melding fact and fiction and merging prose and poetry. What makes the book even more remarkable is that it was written by text message in Farsi on a mobile phone.

Behrouz Boochani is a Kurdish-Iranian writer who fled religious dictatorship for the democracy of Australia, only to arrive on Christmas Island four days after the introduction of offshore detention. Boochani has been imprisoned on Manus Island since that time — for six years that he expects to roll into seven. No Friend But the Mountains is his story.

Boochani draws the reader into his story with rich descriptions. While the book is predominantly factual, it uses fictional elements and poetry to convey the story of life on Manus Island. Boochani says his book is ‘about love, about the philosophy of love, the philosophy of morality’. It is also about Kurdish culture and history, as well as both the refugees and the locals living on Manus Island.

Much of the book is about the system on Manus – a system Boochani describes as designed to take away humanity. I found Boochani’s account of his transfer to Manus confronting, a process described as ‘shattering the dignity of a human being’. Refugees were strip-searched, given ill-fitting yellow t-shirts and a number to define them. No longer Behrouz Boochani, but MEG45.

Of this loss of identity Boochani says, ‘identity is part of my feeling and my desire and my life…  When I came to Manus I saw another system – a different kind of dictatorship. I tried to name people to give them identity and make them beautiful in front of an ugly and cruel system’.

Identity is a major theme in No Friend But the Mountains. Boochani names everything, including the generator (known as Mr Generator), to give people poetic names that say something about them or their place in the story. There is The Cow, The Prime Minister and The Blue Eyed Boy.

The richness of language and imagery make it hard to believe the book was written by text message and translated from Farsi. The success of the translation is a result of the close relationship Boochani formed with his translator, Omid Tofighian. The two conversed almost daily and the translation was done as the book was written rather than when the work was complete.

Australian readers have embraced No Friend But the Mountains since its release in July 2018, with the book reprinted four times in 2018 and already nine times in 2019. The work received the Victorian Prize for Literature, the Special Award in the NSW Premiers Literary Awards, the ABIA Award for Non-fiction Book of the Year, and the National Biography Award.

The irony of these accolades is that the book is written by a writer who cannot put his feet on Australian soil. Boochani is a writer we both laud and detain. He cannot leave the prison our government has put him in to accept awards in the country he tried so desperately to reach.

No Friend But the Mountains is a profoundly confronting read, at once beautiful for its lyricism and horrifying for the brutality of the story being told. Every Australian should read it to understand the atrocities being committed on Manus Island in our name.

Reviewed by Caroline Arnoul, a student in RMIT University’s Associate Degree of Writing and Editing as part of the RMIT Reviews series.