Skin in the Game sets a high bar for itself. The blurb promises to explore the nature and ethics of journalism, reveal what the notoriously private Helen Garner thinks about the art of the interview, and mediate on the ‘pleasure and pain’ of stories by looking at those in Voumard’s own life. 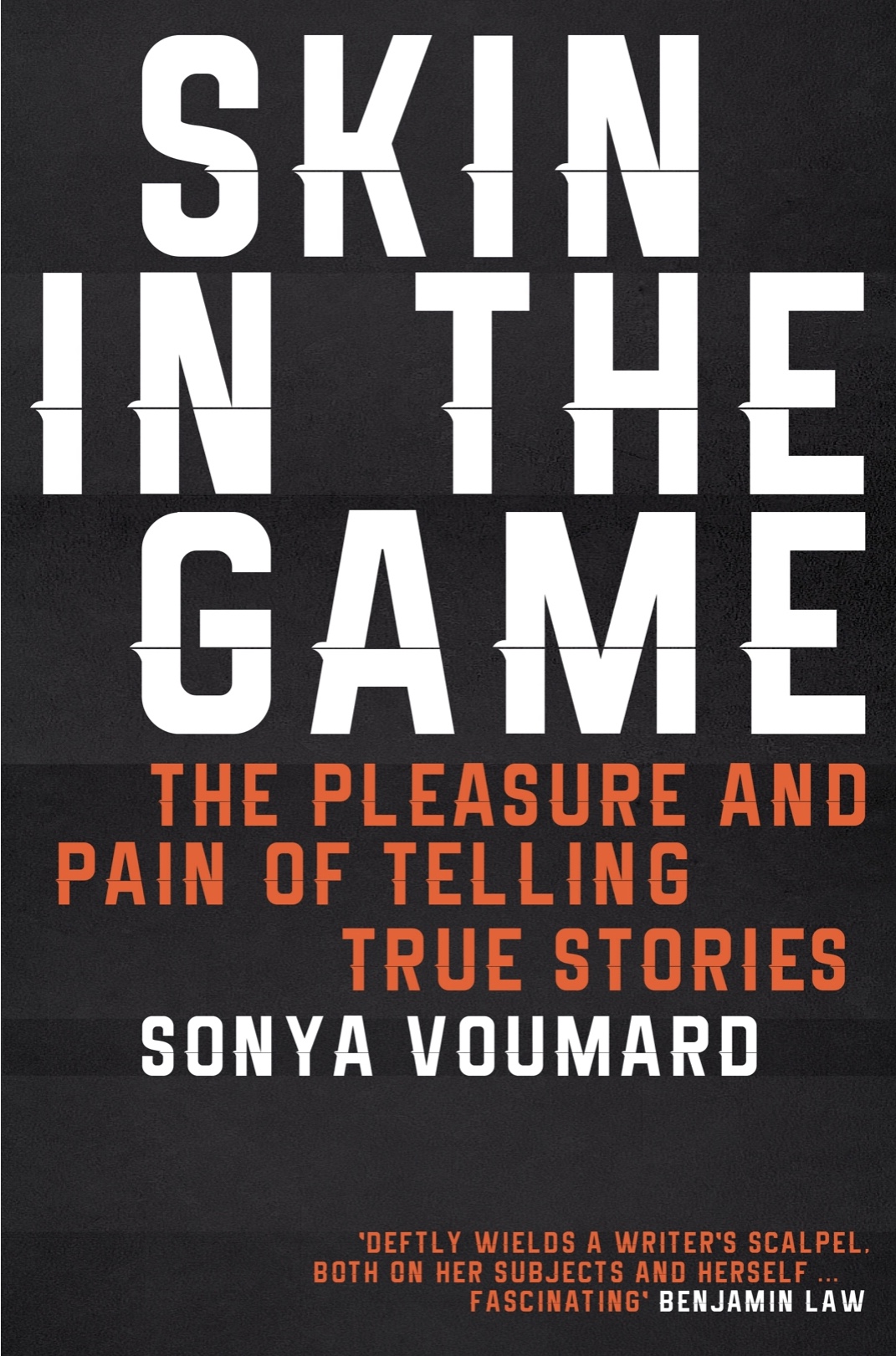 Decades ago, Voumard interviewed Garner for a university assignment. The interview did not go well. Garner outlined what she believed Voumard had misinterpreted in a series of letters, which Voumard kept. Three decades later, Voumard shared the original correspondence with Garner and they discussed what went wrong and the problematic nature of all interviews (the result was published in Meanjin in 2012). This is truly a brilliant few pages, raising fascinating questions about the nature of storytelling, the responsibilities fo those who tell stories, and yes, a little insight into one of Australia’s writing icons.

The sections on Gideon Haigh are also a delightful surprise. Voumard shares her discussions with Haigh, a former colleague and fellow journalist, trying to fathom the ethics of the interview process. Again, these are definite food for thought for anyone involved in publishing, journalism and telling stories. Voumard’s remembrance of being interviewed as a 13 year old by Jennifer Byrne is also intriguing, allowing us to peak behind the scenes and reflect on the peculiar relationship between interviewer and interviewee.

With Garner, Haigh and Byrne, the book is brilliantly successful on it’s first two promises: to explore the nature and ethics of journalism. But as much as I am inclined to favour the work of a Stella Prize longlisted author (in 2017 for The Media and the Massacre: Port Arthur 1996-2016), the final two parts of the book failed to make an impression.

Voumard has led a fascinating life, at times close to the centres of power and one of the voices speaking to and about that power. But many of her reflections on her professional life (for example, the sexism she experienced as a young journalist, the loose sexual mores associated with an industry based on long hours and frequent travel, and the corporate perks available in the pre-GFC world) are not particularly revelatory. Voumard recounts her own life from a distance… almost as though she is a journalist looking at a subject. She seems removed from her own life.

This distance remains when she reflects on her personal life. For example, Voumard recounts how she discovered her grandfather (actually, her mother’s second step-father) had worked as a guard in Klooga (a concentration camp in German-occupied Estonia). Despite recounting this story in a chapter exploring her journey of discovery to Estonia with her mother and sister to research her family’s history, she does not share what she (or her other and sister) think. This part of the story is not told, and it is left for the weight of history to fall upon the reader.

The end of this book also left me confused. The final account is linked to the beginning of the work (a nod to structural symmetry) and is intrinsically tied to one of the most glaring and painful stories of our time… and yet it stands unexplained. Voumard does not tell us how what she thinks or feels, simply that it is. As an ending, it feels unlinked to the stated premise of the book – to explore the nature of telling stories.

One thought on “Review | Skin in the Game: The pleasure and pain of telling true stories”